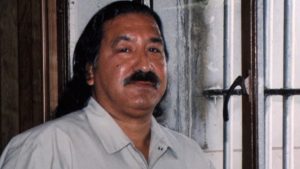 is still in prison on his 78th Birthday.

Who is Leonard Peltier you may ask, but why do you ask?

You should know. This man has been a world wide figure for decades. As I write this paper, Leonard has been in prison for 46 years. He has just very recently turned 78 years old. He was born September 12th, 1944.

His crime was simply defending the home and families of his people from violent acts. His actions were in defense of not just his people but the integrity of humanity, from domination and exploitation. (U.S. Attorney General Ramsey Clark)

A former U.S Attorney, General Ramsey Clark, described the trial and conviction of Leonard Peltier as a situation whereas “there was no evidence that he did it, except fabricated, circumstantial evidence, overwhelmingly misused, concealed, and perverted.”

Much has been written about this episode in American history that is still playing out. But still, many people do not know about the events that led up to the; occupation of the Bureau of Indian Affairs building in the 1970’s, the bloodshed and Indian deaths on the Pine Ridge Reservation, the shootout at the second Wounded Knee, or even who AIM is, or who Dennis Banks, or who John Trudell is.

For now, as a prequel to a detailed blog, I will prepare you for a video presentation that will be about an hour in length of an event I attended in Washington D. C. in 1994. This event was a protest or a demonstration that, at the time, was demanding the pardon or release of Leonard Peltier by then President Bill Clinton.

I spent the day filming the event.

Clinton never acknowledged our presence except to have federal goons and undercover law enforcement infiltrate the crowd looking for a reason to charge someone with a crime. To my knowledge no one was arrested, by for a while I did receive some unwanted attention because I roll my own cigarettes.

I recently re-discovered the original video tapes and they were transferred to DVD and MP4 formats. Sorry, the best I could do at the time was the HI-8 format, but hey, its better than VHS.

Today is Oct. 08, 2022. Six segments of the main video are available at the following links:

This post is provided also to reveal a deception. Today’s social media pundits banter about endlessly the following terms speaking of abuses perpetrated by the FBI as being  “Unprecedented”, and “Never Before Witnessed”, “the actions of a politicized and weaponized agency of the federal government”.

This violence, manipulation, deception, and injustice has been going on for decades, and even probably from the inception of the FBI. The unjust actions of this agency does a great dis-service to the people that are there to do good work. Sorry, you know what they say, one bad apple… and all that.

A few links to pages and activities that have been posted on the internet very recently:

View all posts by Gray Jacket →